Commission Manager is a trade reconciliation tool enabling brokers and funds in the worlds largest financial institutions to settle their commission differences.

The project involved a standardized platform to aggregate and manage trade information, commission balances and vendor invoices and payments. 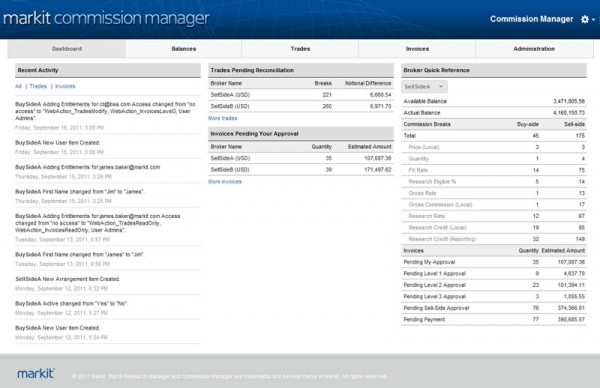 Markit Commission Manager enables users to reconcile their trading commissions with multiple counterparties and then instruct those counterparties to pay for research and brokerage services – all from a single platform. This efficient workflow eases the administrative burden of managing multiple commission arrangements.

The functionality is centered around trade reconciliation, raising of invoices and managing balance differences.

In addition, it was necessary to provide systems integration with all broker-dealers that were involved in the project.

Comments on the Commission Manager platform

Markit Commission Manager is the latest addition to our Markit Research Manager range of services. Our objective is to enable investment firms to manage their entire research workflow – including sourcing research, tracking corporate access, voting on brokers and managing research commissions – from one single platform to bring greater efficiency and internal visibility to the whole process. Markit Commission Manager is the final piece in the jigsaw. We have partnered closely with BofA Merrill Lynch, Barclays Capital, Citi, Credit Suisse, Deutsche Bank, Goldman Sachs, J.P. Morgan and Morgan Stanley to ensure the platform meets the needs of the industry.

This platform is good news for buy-side and sell-side alike. It will allow the buy-side to use a standardised set of tools to manage their commission credits at multiple broker-dealers. We are very pleased to be part of this important industry initiative. This platform is in a strong position to become the industry standard.

Commission Manager in the News

Performance Optimization SQL Server XML
Warning: Use of undefined constant archives - assumed 'archives' (this will throw an Error in a future version of PHP) in /home/desagquj/public_html/wp-content/themes/desalasworks.v1.6/tag.php on line 30 C# SQL Server XML
Warning: Use of undefined constant archives - assumed 'archives' (this will throw an Error in a future version of PHP) in /home/desagquj/public_html/wp-content/themes/desalasworks.v1.6/tag.php on line 30

Today, I’m going to throw the Microsoft textbook out the window and show you a really easy way to get your database records into a JavaScript application. Minimal hassle – maximum bang for your buck.

First, I’m assuming you chose a JavaScript framework such as Ext JS, Dojo, Yahoo UI, JQuery or any other fine library for your front-end widgets. If so then congratulations, this article is just for you.

The trick is to leave the middle-tier c# layer as thin as possible, implementing only the things your client layer cant do reliably: Security and Data Access.

In this example I am only showing how to write minimal code for Data Access, Security is too long a topic for a single article.

READING FROM THE DATABASE

Say you have a database with products in it. For this example I am using the Northwind database:

Here is some C# code I wrote earlier to open up the database and read the first record. If you want some examples of valid connection strings you can look here and here.

Here is the output when you run this code in your browser:

Line 32 uses DataTable.Load() to get the database contents into a .NET data table as follows:

Line 38 uses the DataTable.WriteXml() method to write the contents of the table in XML format as a HTTP response.

Now in order to go one step further, your AJAX application needs to read INDIVIDUAL records, that means one at a time, and show them to the user.

Here is some modifications I made to the earlier code for this purpose:

And if you run this code and insert a “?ID=8” at the end of your request (which you can easily append within javascript) you get the following result:

So where is the trick? Is that everything?

Ahh.. For those accustomed to programming ASP.NET I guess it comes as a bit of a surprise that it would be so easy to get XML formatted records out to the client layer.

Surely there has to be a catch somewhere? … A WCF service with implemented data contracts? An Object-Relational Mapping framework operating behind the scenes? Or at least a strongly typed Collection using Generics?

Nope, thats it. You can do this the hard way, but that’s not why you are reading this article. So now you can take off your C# hat and put on the JavaScript one because the rest of the logic goes on the client layer so that users can get the most of their UI experience.

Here is the source code I used in this example, there are 2 files here: Product.aspx and Product.aspx.cs (code-behind) so I’ve zipped them up into this archive:

You are free to copy the code here but since you are not paying me for it I accept no liability if your site goes topsy-turvy. One more free tip, if you are going to put this into production you may want to use a Generic Handler (.ashx file) instead, its more light-weight and you don’t need all the functionality in the Page class.

Please note: I’ve left you the section “WRITING TO THE DATABASE” for a separate article.

JavaScript NET Framework SQL Server XML
Warning: Use of undefined constant archives - assumed 'archives' (this will throw an Error in a future version of PHP) in /home/desagquj/public_html/wp-content/themes/desalasworks.v1.6/tag.php on line 30

A central point of contact for all Nandos’ stores. From the central login page each user has a set of applications which they can launch automatically by just clicking on the icon. 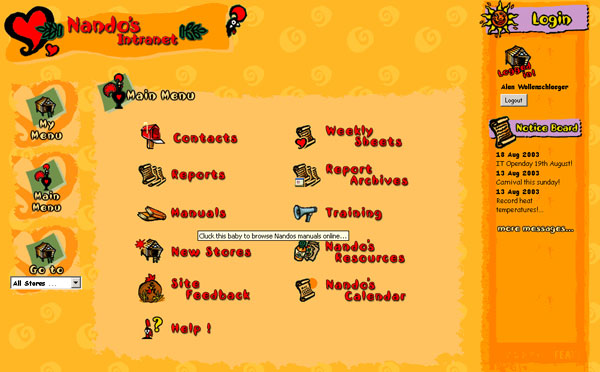 Designing Application Layout for a Store 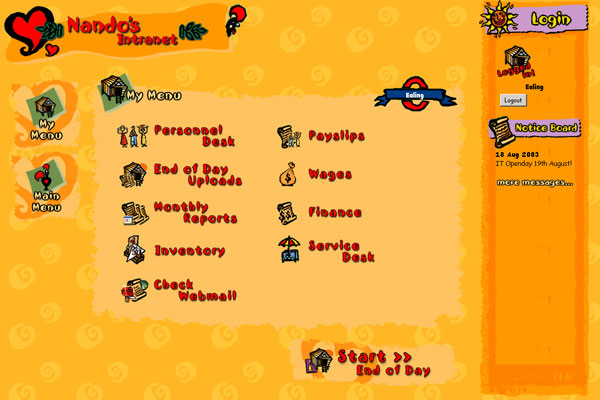 Putting it all together with a Content Management System